Immerse yourself in the steampunk-based fantasy video slot offered by Microgaming and Stormcraft Studios. Released in September 2020 for all digital casinos, Fortunium Gold: Mega Moolah is the much-anticipated sequel to Fortunium, a title released in 2018. In this previous title, players got introduced to a Victorian-era setting combined with the charm of a more futuristic aesthetic. This time, the developers added the incredible Mega Moolah progressive jackpot, which has become a popular addition to other titles with great reception among players. The developers added a fresh new paint coat to the entire design, making it more pleasant for the spectator’s eye in general.

The setup is simple. Victoria and Maximillian, both already introduced in the original release, have been working through day and night in constructing the gigantic jackpot wheel for Fortunium, located right at the center of the city. People from all around the world travel great distances to this fantasy-filled city for the chance to obtain fame and riches. Your mission will be to spin the reels, land winning combinations, and activate the wheel to try winning one of the four jackpots available.

The Steampunk aesthetic makes this slot extra appealing. Easy to play, great for beginners looking for some gold!

Please Play Responsibly:
Fortunium is restricted to personsover the age of 18 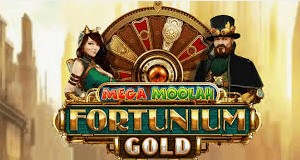 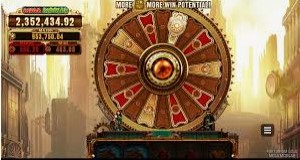 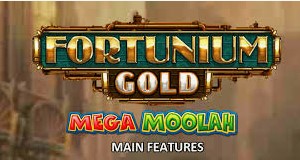 The steampunk world of Fortunium comes back with a more modern look to all of its components. Symbols will show animations once they land winning combinations, and alongside the sound effects and music, players will get a pleasant experience just from the presentation.

As their previous release, Fortunium Gold: Mega Moolah presents us two main characters, Victoria and Maximillian, that will join once in a while on-screen with their respective symbols as high-paying items. The adventurous explorer and the curious inventor exude charisma. They have exciting character designs, with gadgets fitting for the theme, such as an arm transforming into an eagle and plasma guns. Alongside them, players can expect treasure chests, guns, and airships as other high-value symbols, whereas the classic suits —hearts, clubs, diamonds, and swords— work as low-paying items.

The background screen presents us with a piece of Fortunium itself, reaching the skies with its modern buildings. While being a steampunk-based theme, the color palette doesn’t stray away from copper tones, but the symbols add an excellent combination of colors and sparkle to the gameplay. After each round, you’ll get bombarded with nice animations whenever you land any winning combinations, and they get more epic increasingly as the sum goes up.

The music is fitting to the theme, too, adding to the feeling of epic adventures with the background melody. If the player feels like having a more quiet experience, they can go to the in-game settings menu and deactivate all the sounds.

Overall, Stormcraft Studios went ahead with a renovated graphic based on the original release, which results in a smooth experience for players accessing the title on any of their preferred devices.

How to Play Fortunium Gold

The video slot presents a 5-row with a 5 reels configuration, where the player has up to 40 pay lines available to activate, in case they feel like going through a safer route with low bets. The player has to land a minimum of 3 identical symbols in one of those pay lines to earn credits, and the game will calculate the total amount won only from left to right.

Win Booster button, where players can activate this fantastic feature to modify the base game and increase their chances to earn significant cash.

Fortunium Gold comes with an Autoplay feature, too, completely customizable to fit the player’s needs if they have enough credits for all the spins. Anyone who feels like going through the rounds while skipping all animations can activate the Turbo mode, which is a staple idea from Microgaming by now.

To start playing Fortunium Gold: Mega Moolah, you can place a minimum bet of $0.10, and the maximum amount allowed in this title reaches $15 for the base game. The coin value will fluctuate between $0.01 up to $0.50 based on the player’s final selection. These numbers allow great flexibility for all kinds of players, from high rollers to casual people playing on pennies to stretch their bank. Since the title also offers a Win Booster, this means the actual top bet can reach $22.5 for each round the feature is activated. Keep in mind the bet values are also affected by the number of active pay lines, so there’s even more space to play around with numbers.

As expected, the game features Mystery Symbols that are recognizable from the rest, thanks to the question mark box. They will appear as green boxes during the base game and reveal either low-value symbols, high-paying items, or Wild symbols. Keep in mind that the Mystery Symbols can stack, allowing better chances to obtain winning combinations whenever they appear on the screen.

One of the great features of Fortunium Gold is the Win Booster. Players will get the chance to activate this option before every spin by pressing a button on the screen’s bottom. There are two significant changes to the game. The boost will increase the total bet necessary to start the round, asking for 50% extra based on your current bet value. But the increased amount of cash allows Mystery Symbols only to reveal wild or high-paying symbols, which can increase your chances to land a sizeable winning combination. In the game, the Mystery items will switch from green to golden to represent the Win Booster effect.

Of course, activating the Win Booster is optional, but players will undoubtedly appreciate increasing the risk for better rewards. After all, considering the affordable prices to start spinning the reels, it almost seems like a no-brainer to have it activated and pay a bit extra to have the golden Mystery Symbols.

Fortunium Gold wouldn’t be a Microgaming-branded product if they didn’t offer free spins for the lucky players. Once you land at least 3 blue scatter symbols, the screen will transform into a mysterious-looking Play button. By starting the bonus event, the background image changes to a clear blue sky, and fireworks explode in different colors while the free spin bonus event is active. The game will add a single free spin for every scatters symbol landing on the screen. According to the developers, during the bonus event, the player can win up 100x their stake as a prize.

The video slot offers an RTP of 92.8%, which goes below the standard percent in the digital casinos’ industry of 95%. The number might seem too low for some players. Still, keeping in mind that the title new features compared to the original release, it is a necessary drawback to balance the game with an incredible opportunity to win big. Players should also consider that the calculated Hit Rate is 31.56%, which means that there’s a big chance to earn some credits once every three spins. Players should expect to allocate some extra credits to play several rounds in a row, based on this information. Another essential piece of information is that 5.3% of contributions will go into the 4 progressive jackpots.

Compared to the original release, Fortuniom Gold: Mega Moohal introduces an incredible jackpot for lucky players who can trigger it. The feature, whose first appearance was in the original Mega Moolah title, has appeared in several other releases thanks to the fantastic prizes it offers. The addition of this progressive jackpot also explains why the RTP is lower than the original Fortunium. You get the chance to activate this feature in both the base game and during the Free Spins bonus event.

To activate the bonus round, one of the Mystery Symbols has to reveal a Jackpot Wild. The higher your initial bet is, the bigger are the chances to land this desired item. Whenever the bonus round is on screen, the magnificent wheel fueled by liquid gold and lightning will fill the screen. Everyone will feel the hype once the spinning slows down and see if you can land the golden spot!

The numbers will always tick while the player is going through the rounds. The starting numbers for the Mini, Minor, and Major jackpots start at $10, $100, and $10,000 after the counter gets reset. Of course, the Mega Jackpot is the one to seek after since the minimum amount for the final option starts at $1,000,000!

You will win 10 free spins starting immediately after the round ends if you’re lucky enough to land at least 3 blue scatter symbols in any of the reels. Remember that if you trigger the bonus event, you will also activate Mystery Reels between reels 2, 3, and 4, depending on the number of Scatters you landed. These special reels will only have Mystery Symbols, and you can unlock up to three of them if you happen to land 5 blue scatters.

How much money can I win playing Fortunium Gold: Mega Moolah?

The base game offers a maximum reward of 800x your stake whenever the screen gets filled by the highest-paying symbols. By itself, the number isn’t impressive and can often feel slightly disappointing for high rollers, but where this game shines is in its progressive jackpots. Since each jackpot resets once a player wins it, they can range as much between $10 and $1,000,000 and can only go up. While playing Fortunium Gold, players can expect a win every three spins according to the calculated Hit Rate. Combined with the medium volatility, the potential money cashed out from this game can vary between medium and big-sized rewards.

Yes! The title adds the Mega Moolah feature, which shows the player the progressive jackpot accumulated on the screen’s left side and the last time someone hit the corresponding category. Don’t forget that, to activate the Fortunium spinning wheel, and you have to land at least one Jackpot Wild. The particular item needed can appear behind a Mystery Symbol, and higher bets will increase the odds of revealing one of these symbols. Players must also know that they can land this highly-rewarding symbol during the base game and the free spins.

Where can I play Fortunium Gold: Mega Moolah?

The title is available in all online casinos since September 2020 for players that comply with their country’s age restriction for gambling. Since the game uses HTML5 and JavaScript technology, players can access and enjoy Fortunium Gold: Mega Moolah from their smartphones, tables, or desktop devices with no compatibility issues. In case you feel like testing the waters without risking your money on it, you can always try the demo version to understand how the mechanics work. After that, if the fun gameplay convinces you in this video slot, go ahead and start spinning for real!

As a final thought, Fortunium Gold: Mega Moolah has the potential to reward players significant amounts of cash if they decide to play several rounds, ideally with the Win Booster activated. Even if the base game offers a smaller chance to multiply your stakes, it’s worth to continue playing for a chance to start the Free Spins bonus or, if you’re fortunate enough, unlock the opportunity to spin the jackpot wheel. The video slot offers attractive animations and modern graphics to entertain the players with every round, and it executes the steampunk theme with great accuracy.

The title built upon the shoulders of the original release and added attractive features to stand out from the rest of the market. Get into the adventure inside the renovated city of Fortunium and take your chances to spin the jackpot wheel!